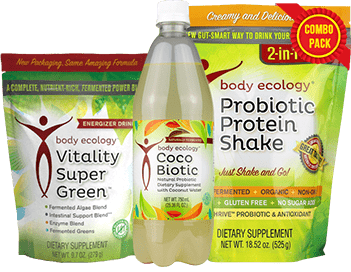 Please Remember, if your order contains Cocobiotic, BeetBiotic, InnergyBiotic or Dong Quai, to refrigerate these products before opening, and RELEASE CAP SLOWLY, using half turns, until pressure is fully released, then open and enjoy!

Dong Quai is a fermented liquid probiotic beverage containing the herb of the same name, used for thousands of years in traditional Chinese medicine. The herb dong quai, a member of the celery family, has been called “female ginseng” for the role it has played in supporting the balance of female hormones, and providing relief of PMS and the symptoms of menopause.

The name dong quai actually translates as “return to order” because of the herb’s ability to promote overall body balancing and restoration. Chinese medicine uses dong quai to strengthen and cleanse the blood, restore energy, and provide a youth-enhancing tonic and digestive aid. This revered herb also has proven antioxidant and antifungal properties. Plus, these gut-friendly bacteria and yeasts come entirely from nature — from organically-certified plant sources. (Unlike numerous probiotics on the market cooked up in some laboratory!)

Effective Healing HerbA thousand years ago, traditional Chinese healers didn’t hand out prescriptions for hormone replacement therapy. They had no pills for menstrual cramps, hot flashes or infertility. But they did have something so powerful that healers — both Eastern and Western — still use it today, ten centuries later. That “something” is an aromatic herb that goes by the name of dong quai.

Perhaps you’ve heard of dong quai. As one of the best-known herbs in China and other Asian nations, it also goes by the name “women’s ginseng”.

Benefits for WomenThe dong quai herb promotes proper balance of the female hormones and the female reproductive cycle. That’s not all it does, however. Traditional Chinese Medicine uses dong quai in numerous ways — in fact, it’s one of the key ingredients in “Four Things Soup”, a widely used women’s tonic. Clinical studies haven’t conclusively nailed down the reasons why dong quai seems to work so well, but some theories have emerged.

Ongoing research on dong quai points to the possibility that some of the herb’s effects are due to phytoestrogens, estrogen-like plant compounds. These phytoestrogens may help to supply an additional mild source of estrogen to balance out levels in the body. Additionally, dong quai contains compounds called coumarins, which act to dilate or open up blood vessels and help control spasms in muscles. Experts surmise that these compounds may act to increase the blood supply to various organs including the uterus, thus promoting the regulation of menstruation.

Benefits for MenThe dong quai herb supports men’s prostate health. Plus, both sexes respond to the herb’s balancing qualities. The name dong quai actually translates as “return to order” because of the herb’s ability to promote overall body balancing and restoration.

Dong quai provides a source of vitamin B12, vitamin A, vitamin E, niacin, folate, and iron. Some of the components in dong quai exert free radical-fighting antioxidant qualities.

Although many different brands of probiotics vie for your attention in the health food store, their effectiveness can vary greatly. Many probiotics boast about how many different strains of beneficial bacteria they include, or the number of colony-forming units or CFU’s they contain. Unfortunately, these numbers may be more misleading than helpful.

The bacteria in some probiotic brands may not be natural to the human GI tract… or even be compatible with other bacteria contained in the same formula. Instead of looking for the most strains or the most CFU’s, look instead for how viable and active the cultures are — and how well they will work in your gut.

The other key factor making Dong Quai such a super-probiotic is its bio-availability as a fermented liquid food, rather than an ordinary capsule supplement. In liquid form, the beneficial microflora in Dong Quai’s unique formula can better withstand harsh stomach acids to reach the walls of your intestines — and thus recolonize them more effectively than capsule probiotic supplements.

Now there’s no need to let your busy schedule interfere with your ability to remain on the Body Ecology Diet. Dong Quai and the other freshly-produced probiotic beverages will nourish your inner ecosystem easily, conveniently, and without hassle.

You can consume it as is, dilute it with flat or sparkling mineral water, or add it to other foods or Body Ecology recommended juices and smoothies.

**This Product is not recommended for pregnant and nursing mothers or children under the age of 18.

My mood changes and hot flashes have really responded favorably to the fermented Dong Quai! I am feeling more sustained energy too, Not like a stimulant high but a boost in my baseline of energy. I have also noticed greater mental clarity and focus. -- Jennifer Boddie, Conyers, GA (Certified Body Ecologist)

The views and opinions expressed by contributors and or product reviews are their own and not necessarily those of Donna Gates or bodyecology.com. These reviews should not be taken as recommendations but rather customer opinions of the products that they have used. The real Body Ecology customers featured in our videos may have been compensated for their time. Results may vary. Furthermore, Donna Gates or bodyecology.com makes no warranty or representation, expressed or implied, as to the accuracy or sufficiency of the information contributed by outside sources, and assumes no responsibility or liability regarding the use of such information. The statements on this site have not been evaluated by the FDA. The information provided in content sections, customer reviews and testimonials is intended for educational purposes only. Products sold on bodyecology.com are not intended to diagnose, treat, cure, or prevent any disease. If you are pregnant, nursing, taking medication, have a medical condition, or are under the age of 18, consult your physician before using this product. Immediately discontinue use and consult your physician if you experience any adverse reaction to this product. These statements have not been evaluated by the Food and Drug Administration. These products are not intended to diagnose, treat, cure, or prevent any disease.
Get 15% Off Your First Order!